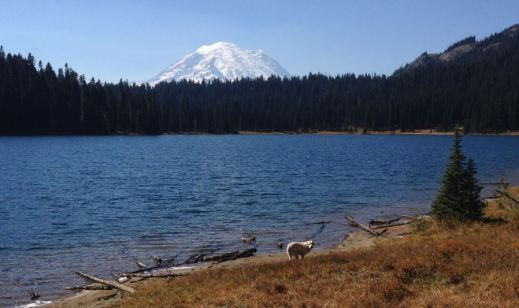 Mongo and Dad decided to take Spork on a hike to Dewey Lake.  Actually, Dad does most of the deciding, but he still prefers to bounce these ideas off of Mongo, who is almost universally positive in his response.  Over the years, Mongo has developed into an excellent “yes-man”.

Dewey Lake and nearby Tipsoo Lake are two excellent spots to take scenic photographs of Mount Rainier.  Tipsoo Lake is  right off HWY 410, and is on the agenda for many of the charter bus tours of the park.  Dewey Lake is on the opposite side of the highway from Tipsoo Lake and down in the valley.  It is a six (6) mile round-trip hike to the lake.  It is about nine (9) miles round trip to hike from the highway and go all the way around the lake.  Far less tourists ever make it to Dewey Lake.

It can be difficult to avoid the crowds at Tipsoo during summer.   Early dawn is one of the few times when there is still a little solitude to be had on the lake shores.  However Tipsoo is a very small lake which can be walked in just a few minutes. 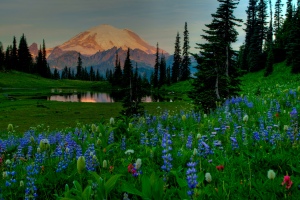 Dewey Lake, however,  stands as one of the monarchs of alpine lakes. This long, broad lake boasts scores of shoreline pockets that offer up the elusive solitude often hard to find in a mountain lake basin. Stunning scenery also awaits, with tall Naches Peak towering overhead and a rich forest cradling the opposite lakeshore. If that isn’t enough, Dewey hosts an impressive population of trout for the anglers among us. Indeed, the lake is stocked periodically by plane–fish are emptied from tanks in free-fall dives during low overflights of the lake.1

So early one morning, Dad bundled Mongo and Spork into the back of the truck, and set out for Dewey Lake.  Once again, they left later than Dad would have liked to, but one makes do with what one has.

They arrived at the trail, and started on towards the valley.  Dad had carefully researched the authorities in charge of managing this trail, and determined as long as he started on the trail in National Forest, he could avoid traveling within Mount Rainier National Park.

Not that Dad dislikes the park, but in the National Forest, Dad does not need a leash on Mongo.  Spork gets a leash wherever she goes. Spork is a bolter.  Bolters can make hikes extra exciting.

END_OF_DOCUMENT_TOKEN_TO_BE_REPLACED 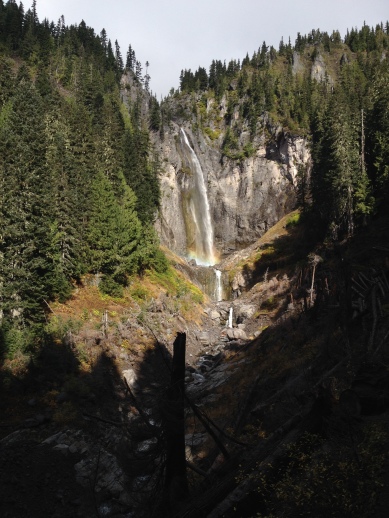 If there is one waterfall that every visitor to Mount Rainier National Park should see, Comet Falls is it. Van Trump Creek hurtles from the lip of a lofty hanging valley, plunging in four steps flanked by lofty amphitheater cliffs of Andesite. The falls are usually cited as standing 320-feet tall, but have been measured by the Northwest Waterfall Survey as 462 feet tall if the lower pools are included.¹

The trail to Comet Falls follows a tumbling, churning, whitewater creek upstream as it thunders through a narrow gorge of glacier-polished rock on its way to a waterfall that drops 462 feet in three tiers.   There are numerous small waterfalls and cascades and two significant ones to admire, all in less than two miles.