This time, Dad left Mongo at home.  Mongo’s back had been acting up, and though his condition has been slowly improving as he loses his holiday pounds, Dad decided to give him a rest.

Instead for this trip, Dad decided to drag Kimi and her friend Reed along.  Dad rode his bike and met them at REI.  Kimi ran there, and Reed drove so the crew could all get back home safely.  Reed and Kimi rented X-C skis and boots.  Dad had all his gear at home ready to go.  The kids were good sports to humor ol’ Dad.

The next day dawned with a steely grey palette. 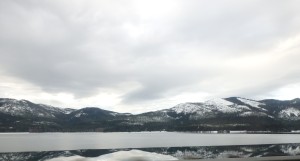 Dad deftly piloted the truck through Snoqualmie pass and over into Central Washington State.  As the team left the pass they opted to stop in Gunnar’s Cafe to grab a bite before heading to Blewitt pass.  As they hopped out of the truck, their attention was drawn to some additional hopping over near the sidewalk.

They had surprised a pair of mountain quail in the parking lot.  There was lots of scrambling on both sides as Kimi tried to get a picture and the quail tried to get away from Kimi.

The skiing as Pipe Creek was similar to the last rip.  The snow was heavy again, and there was a little less cover then last time.  Kimi and Reed valiantly followed Dad down the trail.  Reed picked it up quickly and was soon doing better than Dad.  Kimi took a little longer,

Kimi is an excellent downhill skier and carves the best turns int he family.  But as Dad was learning, X-C skiing was done with the skiis flat on the snow.  No Edging Allowed.  Reed picked this up quickly.  Dad learned by watching Reed.  Kimi had a tough time transitioning from carved turns to skidded turns, but came along nicely by the time they finished up the day.

Standing up is the hard part

Back at the car, the exhausted group piled in and headed for a local tourist destination, the tiny mining hamlet of Liberty, WA.