Kimi wanted to practice with a dry run first.  She thought riding her bike to work would be a fun way to get some exercise.  Wisely, she did not want to pioneer the route on a weekday, when she would have to face gobs of traffic and risk being late to work.  She approached Dad about taking a ride to downtown on a Sunday.

“Sure”, Dad answered enthusiastically.  Who wouldn’t want to take a ride on a nice summer day from West Seattle to downtown?  Dad was also proud that Kimi was thinking of biking to work.  He had been using a bike to commute part-time for quite a while.

“We can stop in at the market and get some fresh produce for dinner and get coffee and something to eat before we head home.”

“Sounds like a plan sweetie.  What time are we leaving?”

At 7 o’clock the next morning, Kimi was ready to go.  Dad was not.

“I don’t know where my bike shoes are!  And I can’t decide to wear this jacket or just carry it.   But if I carry it, it will reduce the cargo capacity of my pack.”

“Then leave the jacket here.”

“Dad, it’s warm enough outside that you won’t need a jacket.  And if you run out of room in your pack, we can put things in my bike’s basket.” That ended the discussion.

“Now we just have to find my shoes.  I left them right here…”

The daring duo pedaled down Delridge, and over the West Seattle high bridge.  Then they deployed onto the Elliot Bay Trail to Alaskan Way.  After a bit more navigating, they arrived at the Public Market in just under an hour.  Dad looked around.

“Wow, it’s a lot less hectic than usual”, Dad remarked.  “Hey look, the original Starbucks is open and there’s no line.  I’d never wait in that out-the-door line, but this just might be our chance.” Dad was very excited.   They went inside.  Only a few bleary eyed early morning visitors were milling about.

“Look, they have a special blend here that they don’t sell in other stores”, Kimi pointed out.

“Oh yeah, and look the cups and merchandise are special logo for this location too”, Dad noted.

Service was quick and friendly, but by the time the pair got their coffees, the line had already grown out the door and onto the sidewalk.  It was apparent it would be another blockbuster day at the Pike’s Market Starbucks. 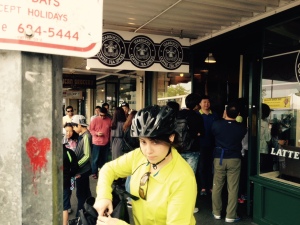 Original Starbuck’s with line out the door

Kimi and Dad carried their coffees down the sidewalk to Beecher’s for some cheese. 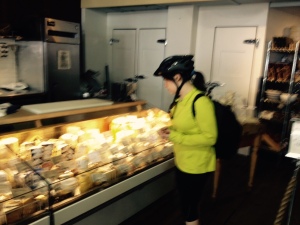 Frank’s and picked up some greens and some fruits.  Then they went to DeLaurenti’s for some Italian delicacies.  And when they finished their coffees, the saddled up and headed back to West Seattle.

They dodged and zipped along in the construction and traffic under the Viaduct.  Cars buzzed them and busses crowded them.  Then at King Street they shot back onto the Elliot Bay trail.  It was a great relief to be away from the insane traffic and construction under the Viaduct.  Dad and Kimi made pretty good time, until they crossed the West Seattle Bridge.  Once on the other side, Dad pointed to a sign.

“Oh look! Pigeon Point!  I’ll bet this takes us up to 21st Avenue.  We’ll be able to avoid Delridge and all the traffic.”

Kimi looked skeptical, but she followed Dad up the very steep street anyway.  Halfway up the short street, Dad hopped off the bike.  Kimi followed suit.  Dad was gasping for air.

“That’s a lot steeper than I anticipated”, huffed Dad.

Kimi looked at him.  “Curse your sudden but inevitable overoptimism!” They laughed as they walked up to 16th Avenue, where the grade became manageable again.  They hopped on their saddles and rode to Delridge and Morgan.

Dad stopped, and looked at Kimi.  “Morgan is a bear to climb, but Delridge has more traffic.  Which way do you want to go?”

Dad and Kimi ground their way up Morgan to 34th Avenue.  With only one more hill to go, they coasted down from there into their neighborhood.  It was a fun ride, and they had all the fixings for Sunday dinner.  And Kimi now had a route to ride into work.  Fortunately, she would not have to ride under the Viaduct.  She could just cross Alaskan Way at King and take King to work.  There was only one thing missing from her plan.

One response to “The Market Ride”