Bringing in the Paper – Part Deux 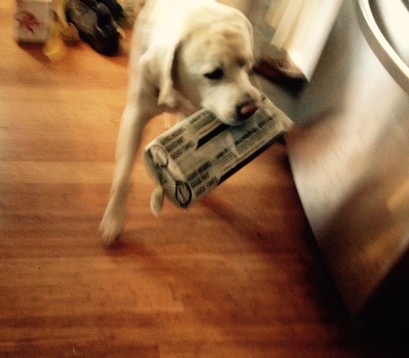 One of Mongo’s best learnings is retrieving the paper. Dad keeps the paper subscription as much for Mongo as for anyone else in the house. Every morning Mongo loves to burst out of the front door and hunt down the morning’s news.

Mongo has always put great thought into how to maximize his food intake. Many times his ability to plan through overeating has led to his detriment (See other posts in this blog). However, lately he has figured out a legal way to increase his cookie quota for bringing in the paper.

He now waits to see if Dad forgets to pick up the paper after giving Mongo his cookie. If Dad does not pick up the paper, Mongo waits just long enough to ensure that Dad has forgotten about the last cookie delivery, maybe 30 seconds. Then he picks up the paper and shows it to Dad again, while he keeps his eye on the cookie jar. He skulks a little so maybe he knows it is cheating, but it doesn’t stop him.

And with Dad being such a soft-hearted man, he usually tosses another biscuit to Mongo, and then Dad quickly scoops up the paper. This week, Mongo used his magnificent mind in that gigantic white head to go one step further. He noticed that in all the confusion of last week, one paper never got opened. Kimi had tossed it into the recycle bin in its plastic bag.

Mongo believes he has free range of the recycle bin, as it is usually full of tasty cardboard, and it is not on the counter, or table, or in the pantry, which would make it off limits. As he finished his reward for bringing in the paper, he perused the recycle bin this morning. What should he behold but another paper laying right on top! He reached over to the bin, grabbed the paper and immediately spun and showed it to Dad. He didn’t even feel a need to for Dad to forget about the treat he had delivered just a moment before.

Dad looked down and saw Mongo standing at his feet with another paper. “Found another paper? Well, I guess that’s fair game. Let me have it and you can have another cookie”, said Dad. Dad grabbed the paper and presented Mongo with another biscuit. Then he removed the paper from the plastic bag, and recycled it, making it ineligible for further treats. Mongo stood there looking up hopefully at the treat jar. Dad smiled kindly, and rubbed Mongo’s head.

“Maybe later buddy. Let’s give the cookie jar a rest for the moment”, said Dad as he walked from the room.