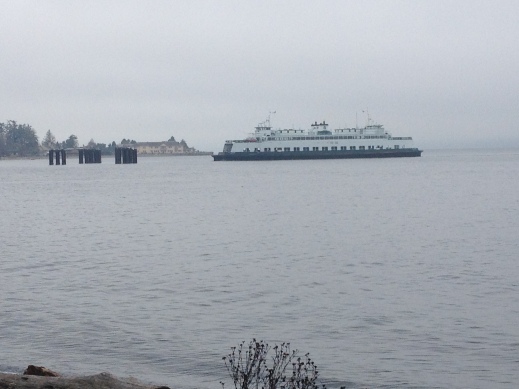 It was rainy and cold outside.  Dad was getting ready to make a quick dash out to the store.

The trash was full, so Dad grabbed the bag from the bin and changed it out.  He turned and stood holding the trash bag while out the door at the sheets of rain pouring from the dark skies, and decided not to take the trash to the right then.  He’d take his chances that the weather would be better when he got back.  Dad left the bag by the back door and threw on his water-resistant climbing hoodie and bolted for the car.

Poor Mongo; as if it weren’t bad enough to be left home, Dad had to leave a tempting bag of goodies on the floor in the kitchen.

The first inkling that Dad received suggesting that all was not well at home was a text from Drewbie.

“What did you leave out?”  Drewbie has awaken to find coffee grounds, eggshells, and bits of paper towel all over the kitchen.  The most damning evidence was the trail of detritus leading to Mongo’s favorite fleece throw rug.  The rug was covered in bits of garbage.

The next day Drewbie came upstairs with a frown on his face.

“What did you put in the washing machine yesterday”, he asked Dad.

“Mongo’s fleece throw.  It was covered in eggshells and coffee grounds, and I didn’t have time to run it down to the commercial laundromat.  Why?”

“Because my underwear is covered in fur”, exclaimed Drewbie with an unhappy cast to his face.

“Don’t worry”, said Dad soothingly, but with an impish smile on his face.  “I hear that fur-lined underwear is all the rage this year.  You know Game of Thrones and all that.”  Dad’s smile grew wider.  “And besides, I pay a lot of money for smart wool hiking underwear.  Warm in the winter; cool in the summer; wicks away moisture.  And you just got yours for free!”

Drewbie rolled his eyes at his father’s helpful platitudes, and stomped back downstairs to look for a more standard base layer.

Dad thought about all the adventures and surprises that Mongo had provided for the family over the years.  Then he smiled and thought to himself, “Living with a Labrador can be summed up as just living in total chaos with fur underwear.” 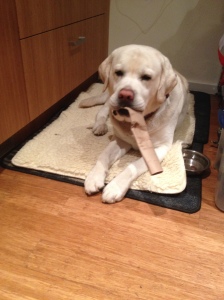