Dad left Mongo and rainy Seattle behind to go address a conference in Phoenix. Not that Dad liked leaving his buddy behind, but as they say, “Business is business”.

As Dad arrived at the hotel, he drove past a big canal filled with slow moving green water. The canal had a jogging path along side of it. He had brought his running shoes and shorts for just such an opportunity.

Dad checked in, but had to wait a bit before he could hit the trail. It was over 90 degrees, and just coming from wintery weather in Seattle, Dad did not want to risk overheating by suddenly trying to run in Phoenix heat.  He could imagine himself undergoing spontaneous combustion just from going outside in that heat.  So he waited.

By about 4:30 in the afternoon, the temperature had dropped below 90, and the sun would still be up for an hour or so, so Dad set off in his running gear through the hotel lobby. He banked left under the bright blue sky and headed down the road towards the canal.

As he started to cross the bridge, he stopped dead in his tracks and stared. All the water in the canal was gone. In fact the canal was bone dry. It just didn’t seem possible. Dad calculated all the possibilities, but they did not add up. At the least, there should still be some puddles and mud at the bottom, but the concrete was completely dry.  He could not imagine where all the water had gone, and the prospect of running along a big dry concrete ditch did not seem all that appealing.

Dad stared for a few moments before shuffling absentmindedly  along the bridge towards the access ramp to the path. That was when he finally saw it.

There was a second canal lying parallel to the first! And it was full of water. Dad stopped and took in the significance of the picture. Two twin canals, one with water and one without. He shrugged and started thundering down the path towards some mountains rising up behind the path. He figured they were maybe three miles away.

It was a nice path, very flat and easy to navigate. As Dad headed towards the mountains, he saw that one of them had a big white “S” on it. Dad decided to run to the “S”. His shoes quietly pounded the pavement as he made his way toward the “S”.

The tricky part of heading toward mountains is that they always look closer than they really are. A person can think that mountains are only few miles distant, and find themselves walking all day to get there.

Dad arrived at Sunnyslope School at about 5 o’clock, and the “S” was practically right across the street. It had taken him about 30 minutes, so that meant he had gone about 3 miles. His guess at the distance to the mountains had not been too far off. He stood beside a busy street, but traffic wasn’t too bad, and Dad figured he could cross easily if he moved quickly enough if he wanted to. He paused on the sidewalk for a moment to decide if he wanted to cross.

Then Dad thought, “I wonder what the “S” is made of. Well, as long as I’m here, I might as well climb up there and see.” These are the kind of thoughts that often get Dad in trouble, especially when they are followed by, “After all, what could possibly go wrong?”

Dad looked around and saw that he had come out at a crosswalk. He knew it was an omen to continue, so he waited for the light and jogged briskly across the busy thoroughfare and up to the trailhead. The sign at the trailhead said he was entering a wilderness area. Running shoes and shorts should be OK for a short jaunt into a wilderness area, he decided, and up he went.

The path was volcanic pea gravel and a little difficult to navigate, but not too bad. Dad just had to watch his footing carefully, to make sure he didn’t slide on the gravel. It was a steep uphill for about two thirds of the trek before he reached a small wide flat spot. He stopped and turned around to look at the valley.

It was a beautiful sight. The sun was starting to move behind the mountains behind him. The sky was turning purple. The ring of mountains around the valley were a deep purple. It looked like Dad was standing in the broken bottom of a gigantic wine bottle, and the jagged purple shards along the rim were made up of purple mountain peaks. And all across the valley floor, lights were beginning to twinkle. Dad was entranced by the lights down in the bottom of the bottle as more and more begin to spark into existence.

And then, “Lights!” he thought. Dad was quickly jarred back to reality. “Lights mean night, and night on a mountain is BAD. I gotta hurry to reach the top before dark.” Heading straight down to avoid the dark never even entered his mind.

Looking back up at the “S” to gage the distance to the top, Dad spun on one foot in the wide spot in the path, and was just about to put his other foot down when he remembered the loose gravel and the treacherous footing. He quickly looked down. And under his foot he saw a snake looking back up at him. “If a snake could look surprised”, Dad thought, “that’s what it would look like.”

Dad froze. The snake froze. Dad hadn’t seen the snake before, and because Dad had been standing so still, and because he was about the same temperature of the rocks around him, the snake had not noticed Dad. It had been crossing the path just behind Dad when he had turned to leave.

They locked stares for a moment and then snake flinched first. With a swish of its body and a quick rattle of its tail it was gone. Dad just stood there with his foot in the air and his jaw on the ground.

“Rattle snake. Hadn’t thought about that possibility. Oh well, at least now the path to the top should be clear.” It was Dad’s first close encounter with a rattlesnake, and the rattlesnake community’s first encounter with Dad. It all seemed to have ended well. Dad put his foot down and picked his jaw up, and started heading to the “S”.

When he got there he saw that the “S” was made of very white stones laid out on the dark mountainside to form the “S”. He stood at the bottom of the “S” for a moment to gain a good understanding of the size and composition of the white stones as any good engineer might, and then he turned to pick a path back down. 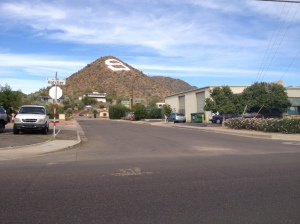 The sun was now completely behind the mountains. Dad used his palm to gage the amount of daylight left. He only had about fifteen minutes. He looked back the way he came, and that looked to be about a 20 minute walk. Continuing forward on the loop seemed like it might be a little steeper but a little shorter. He opted to go forward.

Dad started down from the top just a little too fast. He did not get far before he lost his footing on the gravel, and one foot slid out from under him. He moved to put his hand down on a boulder next to him to catch himself, but stopped when he saw it was covered by cacti. Instead, he dropped his other foot to the ground, and land surfed down the path for about six feet until he reached a level spot.

He stood still for a moment, took inventory, and then decided that aside from now having some rocks in his shoes, nothing else was amiss. In a flash he was back on the trail, loping and surfing his way down. Finally he reached a local inhabitant’s back yard. He sat down on a clean rock in their yard and emptied his shoes. Then he exited the yard, and then carefully navigated his way down their driveway, which was actually steeper than the trail he just left.

Once on the street again, he went back to his jogging pace. It was officially dark now, and he really felt the need to make his way back to the hotel.

When Dad reached the thoroughfare, he stopped. It was full of rush hour traffic so it was now much busier than before. He pondered how to get safely across four lanes with so much high speed traffic. Sprinting didn’t seem like a good idea. An image from “Frogger” popped into his head. He thought for a moment before recalling how he had crossed it the first time. The only problem was, he had come out somewhere else along the street. He didn’t know where the crosswalk was.

Then he saw Sunnyslope School. Dad integrated all the available positional data and jogged directly up the street to the cross walk and then zipped back across the street to the path. Fortunately the path was well let, and Dad made it back to the hotel in fine form.

Aside from almost being rear-ended in his rental car while trying to turn into the conference parking lot by a woman who was smoking with one hand and drinking coffee with the other, Dad made it to the conference with no further difficulties. Dad started to wonder which was more dangerous; the Arizona wilderness or the Arizona streets.

Eventually, Dad successfully delivered his address, and the attendees at the conference never knew how close they had come to having to find a new speaker on very short notice.