Snoquera with Mongo and SPORK

Today, Dad,  Mongo, and SPORK all headed up to the mountains for a hike. The days were getting longer and the crew had a morning start at driving to the trailhead.

The cherry trees were blossoming as Dad drove through Enumclaw.  He passed the Pie Goddess shop on the way through, but made a note to stop in later.  The sky was showing some blue hidden in between the big white puffy clouds.  It was a little cool out,  but just right for a stirring uphill hike.

The last time the team had visited the Wenatchee National Forest, it had been snowing in the mountains, and all of the mountains had a frosting of snow on their tops.  This time the cherry trees were blooming in Enumclaw.

Dad parked in the National Forest Parking lot this time instead of along the highway.  The last time up they had parked at the trailhead along HWY 410, but on the way out, Dad had noticed a pile of broken auto glass on the ground.  It could have been the evidence of an old “smash & grab”.  Dad could not convince himself that people would drive all the way up the mountian to break into cars, but he couldn’t quite convince himself that they wouldn’t either. So he parked in the regular parking lot.

Dad unloaded Mongo & SPORK and leashed up SPORK.  Mongo never gets far from Dad so he is allowed to roam in the National Forest, but SPORK would fly off into the woods in a heartbeat, never to be seen again.  She is not a good camper.

Shes not the best walker when it comes to being leashed either.  She pulls continually, and usually not in a desired direction.  So Dad frequently has to re-orient her by bending over and picking her up and putting her down while she is pointing in the desired direction.  The process is a lot like reorienting a child’s motorized toy that is headed towards a wall.

Mongo watered a tree before they left the parking lot.  SPORK  dragged Dad over and lifted her leg on the tree too!  It was  bit awkward, but she got it done.  For the entire trip, each time Mongo would water a tree, she would repeat the process.  Dad mused that there were some strange dog hormones flowing between those two.

At the start of the first switchback, they met a little family.  It looked like the wife had dragged her less than enthusiastic (and very sweaty) husband out for a hike.  They had covered about a third of the distance to the top.  The husband breathlessly asked Dad, “How much further?  The sign says it’s another MILE!”

While Dad was thinking, Mongo sniffed them for treats, and SPORK tried vehemently to pull Dad over the steep edge of the trail.  “About a mile.  You should be able to finish in a little less than an hour.”  And then Dad added, ” But coming down is much faster.”  Dad didn’t want to discourage the young hikers from continuing onward, but neither did he did want them to forget that they were on a round trip excursion.

As Dad redirected SPORK to begin pulling up the hill, he looked back at the couple and they did not look confident.  By the time Dad and the dogs had hiked out of sight, the couple had still not moved.

The team next met an older couple on the third switch back.  They had fancy cameras and were taking lots of pictures.  The took some pictures of Mongo.  Especially when he found an oversized stick and began carrying it in his mouth.  He had about two feet out one side of his mouth and three feet out the other.  He hadn’t traveled far before the short end caught on a tree and long end swung around to catch on the hillside and he was brought up short.  With a surprised look, his eyes swiveled to see who had grabbed his stick.  He tried to push forward, but the tree and the hill had him tight.  He moved back a little, and the tree on the left let go , but the right side of the stick still dragged on the hill.  His head started to rotate around.  He stopped, and still couldn’t see who had a hold of his stick.  The photographers found Mongo’s struggles with the unseen assailants to be most humourous.  He finally decided that whomever was holding onto his stick could have it and dropped it on the ground.

He then trotted forward nonchalantly forward, and grabbed a new (and smaller) stick, and set off proudly down the path once again.

SPORK continued to pull Dad upwards.  At the top of the trail, the dogs both got big drinks from the nice cool water.  The sky had taken on a leaden quality.  There was not much snow.  There had been a lot more snow in December, but the winter in the Pacific Northwest had been extremely mild, and most of the subsequent precipitation had fallen as rain.  Even the ski slopes were barren. 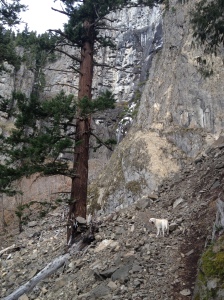 When the dogs  were done drinking, Dad re-oriented SPORK, and she began pulling him down the hillside.  This was Dad’s least favorite part of taking SPORK  for hikes, the part where she tried to pull him off the trail while going downhill.

Several times Dad had to let go of the leash because SPORK  was about to pull him over unstable ground or down too steep a grade.

They made it all the way down without SPORK  pulling Dad down on the trail, a vast improvement over the last trip to Snoquera.

They even made it back to the car with enough time for a stop at  The Pie Goddess in Enumclaw.