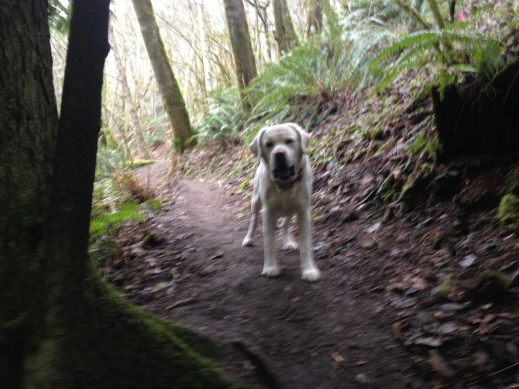 Dad and Mongo grabbed some food to go, and then headed towards the West Seattle Ferry Docks. It was time to pay a visit to George and Linda at the Palouse Winery, and explore a little bit of Vashon Island in the process.

They were lucky on the way to Vashon, the ferry was loading just as Dad pulled into the line. It was another cloudy and wet day, but that was not the kind of thing to dissuade Dad and Mongo from a hike. In fact, it just meant that they would most likely have the trail to themselves. And that the winery tasting room would be pretty quiet also, meaning there would be more snacks for Dad.

One dock worker directed Dad onto the ferry, and then another one made sure Dad’s truck was properly parked. He made sure Dad was up close to the car in front, and then crossed his wrists to show dad to cut the motor.  Dad smiled at the man’s use of the aircraft marshaling signal.  It seemed appropriate since Mongo and Dad were going to stop by George’s winery and George had been Dad’s instructor when Dad got his tailwheel rating in the Cub.  The signal brought back fond memories of some of Dad’s piloting adventures.

Dad hopped out and opened the hatch on the truck canopy to let Mongo see out. The people behind him were quite amused as Mr. M made many different faces at them from the back of the truck.

Once on the island, Dad navigated to the trail head. He and Mongo were the only hikers there. Dad put on his hiking boots, and unloaded Mongo. They headed off across a field towards the trail. The sky was the same flat grey as when they left the house.  There were not shadows on the ground.

Dad noticed the tall wet grass in the field was finally beginning to wash the mud from Ellensburg off his shoes. Dad breathed a sigh of relief. He had thought that clay might have been permanently glued to his boots.

A few yards after joining main trail, the track plunged into the first and deepest ravine. Mongo bolted down the steps toward the stream. Dad suddenly remembered that this was a good trail for using hiking poles. But it was too late, they were in storage. Mongo would be the only one with four on the floor today.

Even though there were steps down the side of the ravine, Dad slowly picked his way toward the bottom.

As they descended Dad remembered that the last time they had hiked this trail, Dad had been carrying a pack with 50lbs of dead weight in it. It would be a lot easier coming out this time. But as he reached the bottom of the ravine, and turned to look back up the steps, he thought, “It’ll be easier, but not easy.” The old Seal/UDT motto from his father came back to him. “The only easy day, was yesterday.”

As they crossed the creek on the first bridge, Mongo ran through the stream and got a quick drink. Dad stopped on the bridge and smiled as he watched his buddy frolic in the stream. Mongo finally looked up to see what Dad was doing, and as their eyes met Dad said, “C’mon buddy, time to move out!”

The started back up the other side of the ravine. Dad started moving in the RMI rest-step. Since Dad’s two summit expeditions to Mt. Rainier, the rest-step was second nature to Dad as he climbed steep grades. The rest-step makes Dad look a little mechanical, but it does make climbing a lot easier on the quads.

Almost as soon as they crested the first ravine, they plunged down into the second. This time Mongo was running a little hot from the previous climb, so he sat down in the stream to cool his private parts. As soon as the icy water circulated to Mongo’s favorite appendages, he hopped up out of the water. Dad laughed. 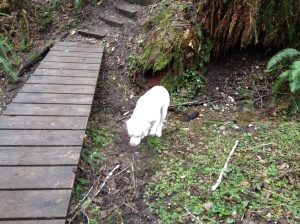 This time, Mongo took a big long drink this time, and then they were off. The trail climbed again, and then started a long slow descent to meet the creek.

Mongo found several seeps that ran across the trail, creating thick black mud wallows. Mongo splashed through the mud and then looked back at Dad with an expression that seemed to communicate how pleased he was with his accomplishment. What he had accomplished was to cover himself in black mud from the knees down. He looked like a Siamese Retriever.

The pair marched over to the benches beside the creek. They took a selfie, and as they were getting ready to head back up, a man and his labradoodle came by. Mongo liked the labradoodle, and thought now would be a good time to play, but unfortunately, the labradoodle had places to be and Mongo and Dad were on a schedule as well. So the Labradoodle headed to the car park at the lower part of the trail, and Dad and Mongo started their hike back uphill.

About halfway to the first ravine, a flash of white in the forest caught Dad’s eye. He spun to his right to see what it was. He was delighted by what he saw.

Someone had used a niche in an old stump to place a small carving. The carving was a Pied Piper scene with penguins following the piper. Dad wondered what the carving meant to the person who had put it there. He couldn’t quite grasp the purpose of the display, but he enjoyed seeing it there none the less, and maybe that was the real purpose after all.

Dad and Mongo charged through the smaller ravine, and then powered up the hump and then down into the steeper one. At the bottom of that last ravine, Dad looked up past the myriad of steps above him and noticed the sky was exactly the same color as when they started, a flat cold grey.  Dad started up the stairs, again doing his mountain climbing step.

After a few steps, Dad flung his jacket wide open. Slowly sweat rings formed on his tee shirt. By the time they were almost at the top. Mongo’s tongue was hanging out and Dad had a nice patina of sweat all across his pects and his forehead.

“Whew!” Dad looked at Mongo. “That was a lot of work buddy!”

Dad loaded Mongo back into the truck and poured a bowl of water for him. Mongo went right after the water. Dad slugged what was left in the bottle, and they were off.

After a short stop at the winery, and a quick ferry ride, they were back in Seattle. They had successfully completed another day of adventure. And Dad could once again bring his boots back inside, as all the mud from Ellensburg was fianlly gone from them, leaving them ready for another adventure.