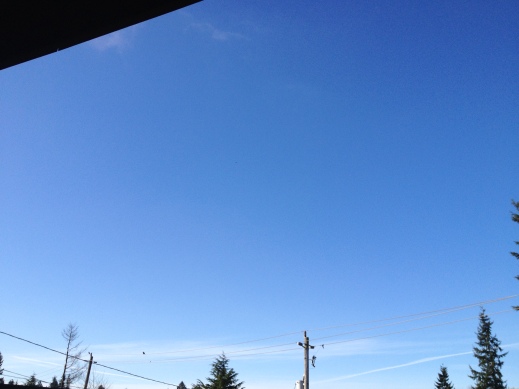 Most days in February in the Pacific Northwest are pretty dreary, with chilly temperatures and lots of drizzle. However, every once in a while, a weekend day in February in Seattle is simply spectacular with cobalt skies and temperatures up around seventy. Back in 2011, Dad and Drewbie had been sitting out in front of Gelatiamo in downtown Seattle on just such a day. Dad and Drewbie were enjoying their gelatos when Drewbie remarked in his laconic voice, “You’re sweatin’.” Dad looked over at Drewbie, and pointed out the obvious.

Dad smiled. “I can’t believe we melt at 70 degrees, even while eating ice cream.”

Drewbie looked Dad straight in the eyes and deadpanned, “We can never go back to Oklahoma.”

Dad smiled again. “I suppose not. I guess we’ve acclimated. We can’t even take temperatures above 70, let along 120. I reckon we’ll be staying here for a while.”

Sunday, February 15, 2015 was another one of those days. It was also the weekend of the 2015 Audubon Great Backyard Bird Count. Dad had heard about the event on the radio during his drive home Friday evening. He made a mental note to see if he could see some interesting birds over the weekend. The sound bit had said observers could count from their own back yards for as little as 15 minutes. “What could you possibly see in only 15 minutes”, Dad pondered, and then continued his drive home.

Dad was enjoying the view from the little porch on his apartment in West Seattle. He was having coffee and admiring the brilliant blue sky, when he noticed a large bird circling over the West Seattle neighborhood of Gatewood. He squinted to make sure he was actually seeing what he thought he was. “White head…white tail…dark body…” He was right. A bald eagle was cruising over Raymond and Fauntleroy!

He put his coffee down and popped back inside to get his iPhone. He snapped a picture of the bird, and then paused. He recalled the Audubon Great Backyard Bird Count.

“One!”, he exclaimed to himself. 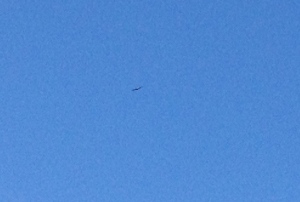 Then he sat down and looked around his little neck of the woods. There was a stellar jay, some chickadees, and a murder of crows. He tried to take a picture of the jay, but it was now hidden in a tree squawking noisily.

Then some seabirds few by, and a flock of starlings rolled overhead. He counted all that in less than half an hour.

Dad made some mental notes, and went back inside to fill in the on-line survey form. He looked at the pictures of the eagle. They weren’t great, but in the corner, he noticed he had also caught the silhouette of the jay. He smiled at the thought of having gotten two birds with one phone.