There is a bandit who lives in Mongo’s neighborhood. He wears a mask, and in the best traditions of bandits, is missing a limb.

Even with the handicap, the bandit is very nimble. Dad has seen him scale fences and climb trees.

The bandit doesn’t take jewelry or money, but heaven help the poor homeowner who leaves their trash can unsecured. They will have a lot of cleaning up to do.

This morning the crows were calling excitedly in the backyard at dawn. Mom-mom went outside and shushed them, but to no avail. The clamour continued unabated.

When Dad got up, Mom-mom asked, “Did the crows wake you?” Dad looked over groggily, and nodded.

“I couldn’t shush them”, continued Mom-mom. “Normally, I can go outside and shoo them away. But not this morning. Come outside and see why.” Dad stumbled out the door and followed Mom-mom outside, where she stopped and pointed into one of the cherry trees in the back yard.  Dad stared up into the brightly lit canopy of trees and blinked his sleepy eyes trying to focus.

Cherry trees in the backyard

The Bandit asleep in a tree

“That’s why the crows won’t shut up. Do you think it’s dead?  If it’s dead, we should do something. What if it falls?”

Dad thought for a moment. “Dead or alive, if it falls, I’m not going to catch it. Besides if it were dead, the crows would be eating it not yelling at it. This is urban nature, we’ll just have to let it run its course.”

At around 9:00 am, the crows suddenly went ballistic.  Dad went out to see what was going on. The bandit was on the move. The bandit was moving in the trees, and crows were cawing and swooping. Dad secured the dogs and cat and went back inside. After about 20 minutes, the crows went silent, and Spork suddenly started barking at the front yard.

The bandit was leaving the scene of the crime. Some watchdog thought Dad. Spork let the bandit climb our tree, and then make it all the way out the front of the yard before she alerted Dad. Maybe she would do better with human intruders, but in the mean time, the family would just have to rely on a house burglar tripping over a sleeping Mongo. And as for the neighborhood bandit; it clearly was beyond either dogs’ capabilities. 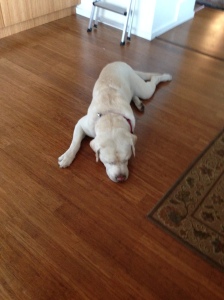 One response to “The Neighborhood Bandit”