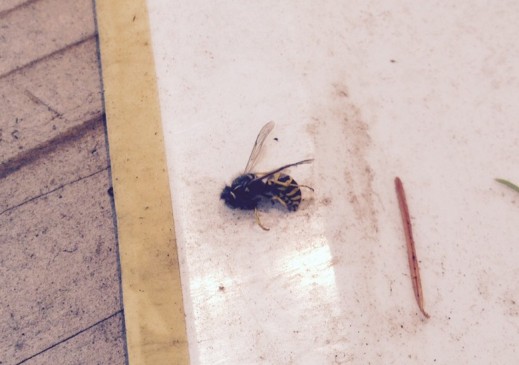 Mongo had finished all the apples again.  Dad and he were finishing a walk back from the school, when Dad led him over to the apple tree again.  Mongo just stared at Dad reluctantly as Dad leapt over the bar ditch once again.

“It’s OK buddy.  It’s pitch black and rainy.  There won’t be any yellow jackets around tonight.”  Hubris hung heavy in the air.

Dad started to fill a bag with apples.  Mongo stood on the road and watched.

They walked home with their bag of loot.

Dad put the bag on the kitchen table and took off his coat.  Mongo waited to be fed.  It was dinner time, and he was already drooling.  It is well known that Dad dishes up some of the best kibble anywhere.

Dad filled the dish, added a little gravy from his dinner, and set it down.  Mongo devoured the contents, and looked up at Dad.

“Ready for an apple”, Dad asked him.  Normally Mongo is all ears for the offer of food, but he seemed distracted, especially since the subject at hand was food.  Mr. M kept looking around and cocking he head in a puzzled manner, with his ears at attention.

Dad started scanning the kitchen.  The buzzing was coming from the apple bag.  Dad hopped over to the bag and grabbed the handles.  “Let’s get this outside, eh buddy”, he said hastily.

He quickly moved the bag of apples out of the house and onto the porch, but when he re-entered the kitchen, the buzzing continued.  Then they both stood silently in the kitchen; ears pricked, heads cocked and swiveling.  Dad located the source of the sound first.

“He’s over there by the light fixture.”  Mongo’s head followed Dad’s as he swung toward the source of the sound.  As soon as Mongo was sure of what that buzzing was, he made a bee-line to the door!  Grandma Pippin didn’t raise no fools.  (Dad was perhaps the exception that proved the rule.)

“Not to worry buddy”, Dad called after him as he picked up a section of newspaper.  Dad assumed a hunter’s crouch as he turned toward the source of the sound.  “I have tone”, he said quietly as he stalked toward the light.  The hornet buzzed drunkenly around the fixture.  Apparently, the bug had imbibed in some fermented apple juice.

Splat!  Dad smacked the yellow jac and then hopped back towards the door.  His every muscle set to sprint into the backyard to join Mongo if his gambit failed.

There was just the tiniest “tink” as the hornet fell to the table.  Dad leaned forward to observe.  The bug lay motionless on the table.

“Got ‘im!  It’s OK buddy.  You can come back in now “, called Dad from the kitchen.  Mongo tread cautiously through the back door.

Still, Dad left the bag of apples outside overnight, just in case there were any other Trojan horse apples in there.  He was rapidly gaining an appreciation of the capabilities of the yellow jackets and in particular their ability for all weather operations.   Maybe a little of Pippin’s practicality had rubbed off on him after all. 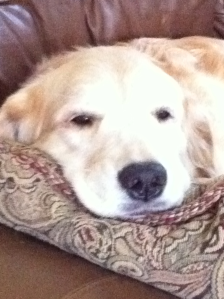