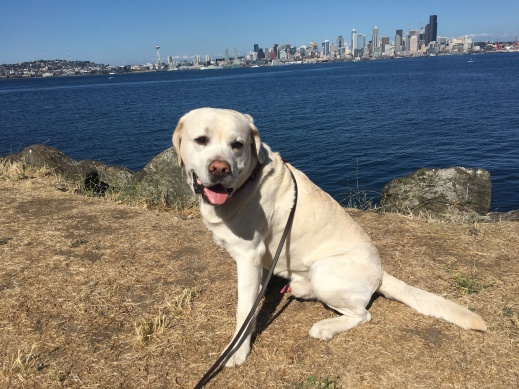 Mongo and Dad decided to take a walk down to Alki Point.  It’s a nice stroll along the Alki Trail in West Seattle’s beachfront neighborhood.

They usually park near the Seacrest Ferry Docks and walk North towards the point and then onward towards Alki Beach.

Alki Point is the spot where the first white settlers to Seattle spent the first winter.  Val over wedgwoodinseattlehistory.com, has a short history of that winter.  ( Click here for Val’s History of Street and Place names in Seattle)

When the weather is nice, Alki is an exceptionally scenic place to walk.  At the ferry docks, one can see the downtown Seattle skyline, and after rounding the northern point, one can see across Puget Sound to Bainbridge Island, and clear out to the Olympic Mountain Range on the peninsula.  Today was one of the dog days of summer, when it is good to be a dog and be outside.

There is one place on the walk where Mongo always become skittish.  It is near some trees. Dad has studies that spot carefully, but had never figured out what makes Mongo so anxious.  Perhaps the sanitary sewers go out under that spot.  The noise, or vibrations, or smell from that might raise Mongo’s hackles a bit, he thought.  (Click here to see Mongo investigating the mystery spot.)  Regardless, they soldiered on.

It was a sunny afternoon, and temperatures were near 90 degrees.  Dad and Mongo walked all the way around the point to Gelarto in West Seattle, where Dad got a cup of gelato.  The staff there was very nice, and they brought out  a bowl of water for Mongo.  and  then Mr. M got to clean out the cup from Dad’s gelato.  (Ice cream is one of those things that Dad doesn’t share with Mongo.  Dad claims that it is for Mongo’s own good because if Mongo got a brain freeze in that giant head of his,  it could be fatal.  But Mongo thinks Dad is just selfish when it comes to frozen treats!)

After enjoying a brief respite outside of the gelato shop, Mongo and Dad started back down the trail towards the truck.  As they walked along the beach, Mongo started to drag.  Dad instantly became worried that the heat was affecting his little buddy.  Mongo will be seven in a couple of months, and his age is starting to show.  Even Drewbie recently mentioned that Mr. M no longer bounds up the front steps to get the paper any more.  At least not the way he did just a year or so ago.

Dad ran through the data:  Mongo just had water, and he left some in the bowl, so he was not likely dehydrated.  It was close to dinner time, but he clearly wasn’t in danger of starving.  There were no treats around, or other dogs to distract him.  That pretty much left the heat.

Dad saw a path down to Elliot Bay where a Golden Retriever was swimming.  Dad figured Mongo could cool off in the water.  He led Mongo down to the surf, and turned him loose.

Mongo frolicked in the waves and tried to steal the other dog’s stick.  He seemed to be fine.  Dad let him cool his jets for a few minutes, before turning back to the trail.

“You’re gonna need a bath tonight after that swim”, Dad told Mongo.  He wanted Mongo to know ahead of time so there would be no surprizes when then they got home.

“Oh buddy!  That’s not gonna work out well!  Come here you knucklehead!”  Mongo pulled his head out of the sand, literally, and turned his sand covered face to look at Dad.

“Sand in the eyes and nose is a bad plan, pal.  What made you do that?”

Mongo looked at Dad and then rolled in the sand until he was a wet gritty mess.  Finally Dad leashed him up and dragged him back to the trail.

Dad admonished Mongo.  “You are such a knucklehead sometimes.  What were you thinking back there?  You are not going in the house like that!  This is gonna be a big bath!”  (Also known to Mongo as “BAFF”.)

Mongo turned with a sand-crusted face to give Dad a look, and continued to walk back to the truck.  Still he seemed to be dragging even though he was cooled off.  Dad attributed Mongo’s malaise to having sand up his nose, and began making plans to get him clean.

Back at the house, Dad dragged out the doggie porta-bath, and unreeled the hose.  As Dad began washing all the sand off of Mongo, his mind went back to the walk.  Mongo seemed fine now, but what had been wrong with him back on the trail.  Was he over heated, or was it something else?  Dad pondered this further as he toweled Mongo dry.  Toweling is Mongo’s favorite part of BAFF, and almost makes up for the other 90% of the BAFF process.

Dad filed his questions on Mongo’s possible maladies under ‘heat’, and made a note to watch him for any other signs over the coming days.