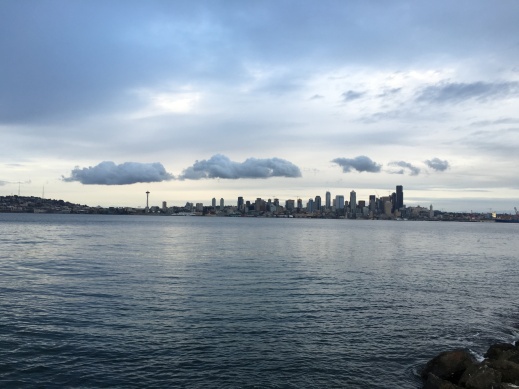 A week after their last trip to Alki Point, Dad had another errand to run on the North End of the peninsula.  Mongo looked bored, so Dad plopped him into the back of the pick-up and off they went.  After dropping off some things at the depot, Dad  thought it might be nice to stroll on the Alki trail again.

The weather was very different from their last walk.  The sky was cloudy and grey and there was a definite chill in the air.  Dad ruminated on whether or not to bring a jacket.  He silently polled the walkers passing by the truck, and decided to forego the jacket.

As always, they were off to a slow start.  Mongo had to stop and  sniff every tree and bush along the trail.  Dad was just enjoying the sounds and sights while Mongo buried his nose into the base of every planting along the trail.

Slowly they worked their way down towards Mongo’s first mystery place; the place where he always seems skittish.  As they approached the group of trees that marked that particular spot, Mongo’s hackles went up again.  Dad tuned his senses to try to capture what ever it was that was spooking Mongo.

Visually, Dad saw nothing out of order.  However, Mongo was sweeping the ground with his nose, and starting at every sound, and puff of breeze.  Dad concentrated on the sounds in the air around him.  Mongo was checking every inch of the ground in front of him with his nose, using it like a Marine sweeping a beach with a mine detector.  And he seemed just as nervous.

Slowly Mongo was making his way towards the sea wall.  Dad followed.  Dad was scanning a wider area with his eyes, looking for underground pumping stations, or subterranean back-up generators, or anything that could be creating  a disturbance in the Force, but he saw nothing out of the usual.

Eventually Mongo made it to the edge of the sea wall, where he peered over and froze.  Dad walked up behind him, which almost shot Mongo over the wall in a terrified leap.  Fortunately,  he bounced more sideways than forward, and he landed back on the sea wall.

Dad looked over, and searched for what Mongo was looking for.  As he surveyed the scene below, a theory began to form in the back of Dad’s mind.  Dad looked up and down the base of the sea wall, and listened intently.  Eventually the individual images formed a cohesive thought in his mind.

The rocks right below this point in the sea wall looked different than the ones on the rest of the wall to either side.  The rocks to his right and left were big roundish boulders of granite.  The ones right below him were much more jagged, with odd angles and pockets and things.

The waves continued to crash against the rocks below him.  And as they did, he noticed that they made had a distinctly different sound from those along the rest of the trail.   This sound was much more busy.  The rest of the trail had more of the ebb and flow beach sounds that one might expect.  But the water  crashing onto all the small surfaces, and projections from these rocks produced an almost continuous splashing sound, almost like a park fountain.   It created a  distinct cacophony surrounding just these rocks.

Mongo was still staring down at the rocks.  Dad assumed that the very different type of sound here was what made Mongo uneasy.  Why that sound affected him like this was beyond Dad’s ken, but at least now he had a plausible root cause theory.

They continued to stride down towards the beach.  They were moving briskly, and with the temperature in the low sixties.  This time Dad was not the least bit worried about Mr. M. overheating.

Dad’s ears were still perked, and he was listening carefully to the sounds of the sea.  Suddenly, off in the distance, he heard barking.  He trained his eyes on the water to try to locate the sound.  Then, off in the distance he saw a dark shape porpoise out of the water, and then pop back up and bark.  It was a sea lion out in the sound.  Dad’s eyes widened, and he pulled out his trusty iPhone to try to get a picture, but the pinniped was too far away.  Dad watched as the sea lion headed out to the shipping lanes, and joined the procession of other voyagers on the water.

Scanning across the water, Dad saw that there was indeed, quite a few voyagers out on this overcast evening.  The ferry was leaving a wake as it headed to Bainbridge Island, and two sail boats were having a race along the sound also.

Sailboats on the Sound

Dad continued down the trail,  drinking in the sights and sounds.  A little further along, a crow’s caw caught his attention and he looked up to see a mismatched pair of birds furballing across the sky.  The large crow was in the lead, and Dad wondered what was chasing it. As they drew closer, Dad saw that he had misinterpreted the sight competely.

In actuality, the crow was doing the chasing.  The large bird being harried from behind was a bald eagle.  As they passed over the road, the crow peeled off, and left the eagle to retreat in peace. 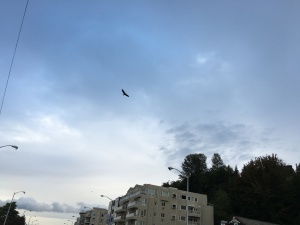 Dad marveled at the variety of bird species within Seattle’s city limits.  In a given day, one could see everything from a humming-bird to a bald eagle, or from a jet black crow to brightly plumaged pileated woodpecker.

Dad admired the majestic bird soaring overhead, and then turned back to the trail with a smile.

They continued up the trail towards the beach.  As they rounded a bend to the corner of the beach, they came upon another colorful Seattle native.  Despite the tendency of the city’s residents to cloak themselves in black and shades of grey, there are a few that sport some amazing colors, right down to the bright orange shoes. 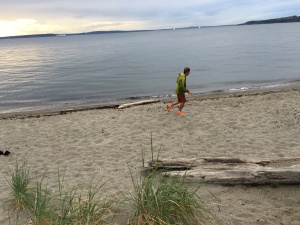 A little further on, another dad had his son on the beach, and was playing beach soccer with the little tyke.  The dad has some very fancy moves with the ball that Dad would only watch and admire, knowing that at his best, his soccer skills had never been any where near that good. 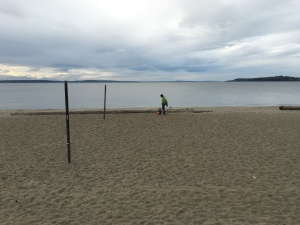 Dad turned back to the trail, and together the two wanderers  sauntered  up a bit further, and then the same malaise that had affected Mongo a week earlier, took hold of him again. Suddenly he didn’t seem able to move.  The wind was blowing steadily from the land.  Mongo’s ears were being ruffled by its motion.  Dad stopped and scanned the surroundings.  Nothing seemed unusual.  The temperature was far from balmy. In fact the wind made things almost chilly.   Mongo couldn’t possibly be overheating.  Dad bent down and asked him, “What’s wrong buddy?”

Just then, Dad made use of his much degraded version of Mongo’s favorite of the five senses.  As he stood back up to look around, Dad took a deep breath in through his nose, and then he knew.

The strong breeze was carrying the smells from across the road in tight streams.  And since the scents were  so concentrated, even Dad could smell it now.

Dad stood up straight.  He looked down at Mongo, and laughed.  “Really buddy?  Is that what this is all about?  You want a burger?” 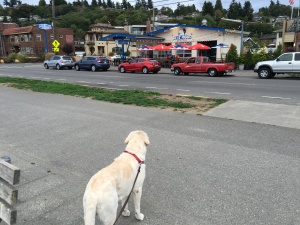 As if to answer, Mongo took a classic point right at the Blue Moon Burgers across the street.  Earlier in the summer, Dad had stopped in there with Mongo on a slow day, and the staff had treated Mr. M. to a burger patty that had accidentally become way overdone.  Dad wondered if Mongo remembered the incident.  Perhaps that was why he kept trying to draw Dad back there.

“Honestly buddy, those are great burgers, but they’re a little pricey, especially if it’s just for you.”

Dad felt a great weight lift from his shoulders.  The sudden sluggishness that had overcome Mr. M. on previous walks past this spot had made Dad really start to worry  that at 7 years old, Mongo might be fading fast.  Now Dad just stood there, with a silly grin on his face, shaking his head.  Dad chided himself.  He really should have looked for food-based reasons for Mongo’s behaviour before worrying about anything else.

Finally, he got Mongo’s attention and aimed him back down the trail

“Yes, I know those burgers are really tasty, but I’m sorry buddy.  Big buck gourmet burgers are only for special occasions.  Let’s go home, and I’ll put some chicken stock in your dinner tonight.”

With many reluctant looks behind him, Mongo finally relented and began the walk back down the trail to the truck.  Dad walked along silently satisfied that two great mysteries were solved.