Dad was fail once again.  Not that “fail” is all that foreign a concept to Dad.  Dad is definitely not afraid to “fail”.  Dad’s theory on “fail” is similar to Thomas Edison’s thoughts on life, if you try enough times, the successes will outweigh the failures. So Dad soldiers on, knowing that good things will come in the end.

This time Dad’s “fail” had been showing up a few seconds too late to buy his Snow Pass.  To use the Snow Parks in Washington state, one has to buy a Snow Pass.  Dad had decided to take Mongo cross country skiing on Saturday at the last minute.  Now he had waited just a smidgen too long to get in line for the snow pass, and there was a tourist had jumped in front of him, asking how to go hiking in the snow.  On a weekend morning, every second counts on the way to the mountains, because multitudes of other outdoors people are heading there also.

The ranger was trying to answer the man’s question of hiking in the snow. but apparently the tourist’s English was a bit limited in the realm of the winter sports vocabulary, and the very idea of snow shoes was completely foreign to him.   This was causing the ranger to have a difficult time conveying the concept across the cultural divide.

There was nothing else to do but wait.  Dad had just seen the new Star Wars movie the night before at Cinerama, so he engaged in some Jedi calming routines while he waited.  But despite his best efforts with the force, his right foot was still tapping.

The ranger’s descriptions of snow shoes grew to include big sweeping elliptical arm movements.  Their conversations was starting to look like a very awkward ballet, that might go on forever.

Eventually, the winter tourist departed in the general direction of REI’s rental counter, but by this time, Dad figured his chances of getting to a nearby snow park and back before dark were shot.  He approached the counter.

“I’d like a Snow Pass”, he droned to the ranger.

“For today”, asked the ranger.  “You know, they’re only good for one day, and it’s kinda late to get started for today.”, he added cautiously.

“No.  Tomorrow will be fine”, moaned Dad.

“Okey dokey.  We’ll fix you right up”, chirped the ranger.

END_OF_DOCUMENT_TOKEN_TO_BE_REPLACED

Merry Christmas from Mongo the Red-nosed Labrador and his Elf on the Shelf!!!  ( aka Drewbie)

Mongo is pleased to have Labrador Retrievers listed on the 10 Best Outdoor Dog Breeds.

Of course, they show a chocolate lab instead of a white one, because you can’t see dirt on them as easily as on a white one!

Mongo dresses up as a Weimaraner 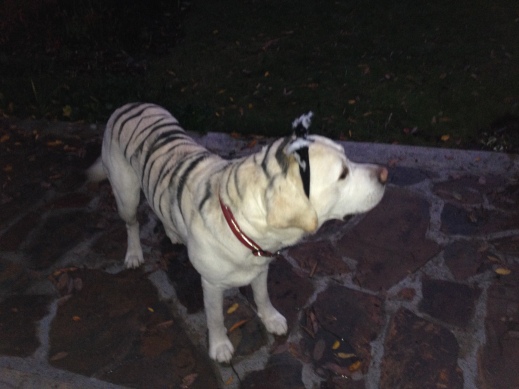 It was a dark and stormy night in Seattle…  So not very many trick-or-treater’s came by Mom-mom’s house for candy, even though she had bought the giant economy size box.   And the lack of visitors was a shame because Mongo was wearing a very exciting Halloween costume.  After trying on several different costumes, like a dragon or a soccer player, Dad decided that a cloth costume was not going to work.  Poor Mongo tripped on the soccer jersey sleeves, and looked very unhappy.  And the dragon head flopped over Mongo’s head, making it very hard for him to see, so he bumped into walls and furniture.

So Dad got on the internet and found the things he would need to make a really cool costume for Mongo.

END_OF_DOCUMENT_TOKEN_TO_BE_REPLACED

A New Talent for Mongo’s Bag of Tricks 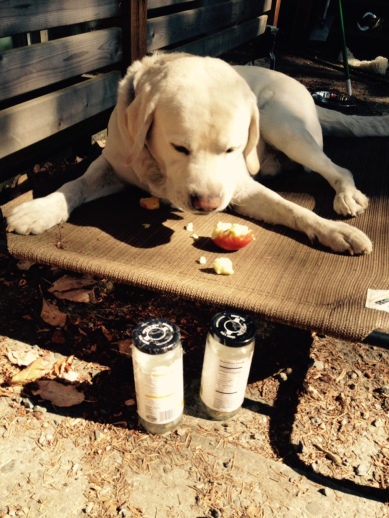 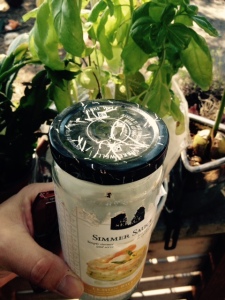 Kimi found more food from the pantry in her room.  After all the flour mess Mongo made, Kimi found he had also opened two jars of “Simmer Sauce”.  The question remained, how did he open the jars with no thumbs?

Mongo and His Toys

Mongo is a lab.  In fact, he is a 5 year old boy lab.  And he acts like it.  He loves critters, and mud, and getting dirty, and romping in the school yard as much as any other five year old.

All of our previous dogs have been golden retrievers.  They were good family dogs; very reliable, and very family oriented.  However, for the most part they have not had much interest in having fun for the sake of fun.  Mongo is the epitome of fun.  END_OF_DOCUMENT_TOKEN_TO_BE_REPLACED