Heidi is Out and About 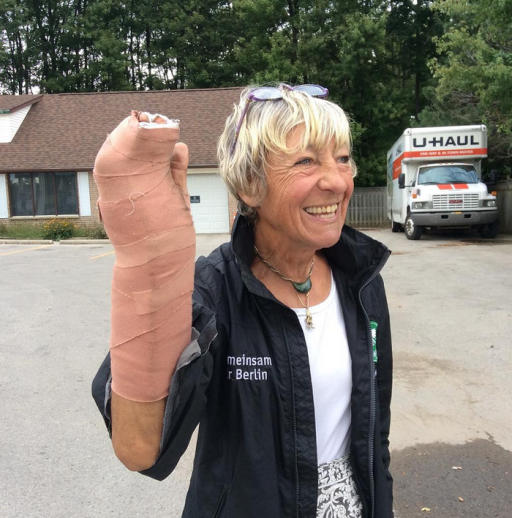 At the beginning of September while Dad was doing a training run through West Seattle , Dad stumbled upon Hudo, a 1930 Hudson, parked in the neighborhood.   When Dad looked up Hudo and Hudo’s driver, Heidi Hetzer, he discovered that Heidi is a 78-year-young former automobile dealer, rally car driver, classic car collector and popular celebrity in Berlin, Germany. She is currently circumnavigating the globe in Hudo. She started in July 2014 in Berlin, and in late August, was passing through Seattle.  Her website is http://heidi-around-the-world.com/about/

Dad had been following Heidi’s progress as she overcame various mechanical difficulties with Hudo on her drive eastward through Canada.  This weekend, Heidi had some very disturbing pictures on her Instagram.

Instead of showing Hudo in a repair garage, they showed Heidi in a hospital room, and pictures of a very badly damaged hand.  As Dad worked to translate the German text, he slowly learned that Heidi had suffered an industrial accident while working on Hudo.  While she was cleaning with a rag, the rag wrapped around the accessory drive shaft from Hudo’s engine and the rag dragged Heidi’s hand into the shaft.  Heidi lost her little finger and parts of the other fingers on her right hand.  However, as Dad read on, Heidi seems to be recovering quickly.  Sunday’s GPS track and Instagram show that Heidi visited Niagara Falls.

Getting out after such a serious accident is a very good sign, and Dad and Mongo both wish Heidi a speedy recovery so she can get back to her inspiring adventure.

One response to “Heidi is Out and About”