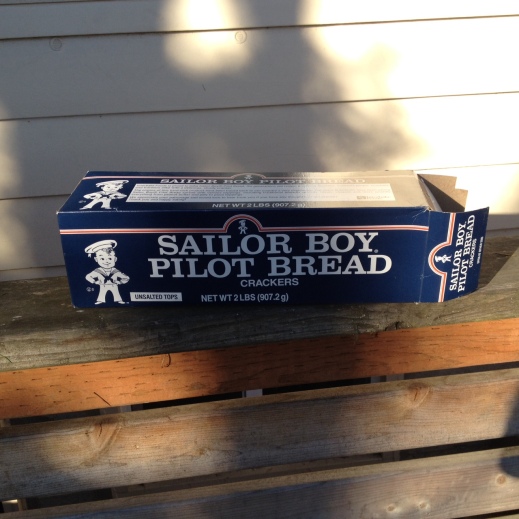 This modern day version of hardtack, albeit with some leavening and shortening, is produced today by Interbake Foods of Richmond, Virginia.    Alaskan law requires all light aircraft to carry “survival gear”, including food. So, the blue-and-white Sailor Boy Pilot Bread boxes are ubiquitous at Alaskan airstrips, in cabins, and virtually every village.¹

98% of the Pilot Bread is sold in Alaska.  However, Drewbie found some in a local market in Northwest Washington State.  He decided to surprise Dad by bringing some home.

Back in the day, Uncle Marc and Dad had feasted on hardtack from K-rations whenever Grandpa came back from maneuvers.  Canned eggs and ham, hardtack, and waxy chocolate were among their favorite eats.

Dad and Drewbie each enjoyed one palm-sized Pilot Bread cracker as soon as Drewbie brought them home.  Dad reminisced about the good old days, and about opening dinner with a genuine p51 can opener, and drinking hot chocolate from a canteen cup.  However, after one cracker each, they both decided they had had enough.  They each grabbed a glass of water to wash down the rather dry delicacy.  The box  of Pilot Bread box sat on the counter for several days, undisturbed until…

Mongo finally noticed the box of crackers.  Apparently, he had been counter surfing again.  As his nose passed by the box of Pilot Bread, it registered a food or food-like substance.  Clearly this warranted more attention from the nose.  It next determined that the substance was not dog food, which made it extra special.  Mongo leaned further over the counter and toppled the box.

It fell with the open end facing him.  He was able to grab the end of the inner bag and tug it gently out without disturbing the box.  As he pulled back from the counter, the bag flopped loosely from his big labrador mouth.  He wasted no time in bolting out the doggie door, and shredding the bag to get to the delicious treats inside.

Later that day Dad came home from a day trip to Bellingham.  He noticed the shredded empty bag in the driveway, and immediately launched into an investigation to determine the source of the bag.

The first thing Dad noticed was that Mongo’s water bowl was empty.  He was sure he had filled it just that morning before departing for Bellingham.  Of course, this was his third day in a row of driving to BLI and he told himself, he may have mis-remembered the morning.  He filled the very large bowl with water again.

Mongo immediately drank half the water from the bowl in one sitting.  Dad felt bad. Perhaps the little guy had gone without water for most of the day.  But Dad had to postpone the rest of his investigation until he had completed an errand.  Dad leashed of Mongo and they went off to deliver some leftovers to Kimi and Mom-mom.

At Mom-mom’s house, Mongo immediately headed to the water bowl and drank all of Spork’s water.  Mom-mom commented on how thirsty he was, and refilled the bowl.  Mongo drank that too.  Excessive drinking is a sure sign that Mongo has eaten something that doesn’t agree with him.  Dad started to worry about what had been in the bag he had found earlier.  Dad dropped off the leftover pastitsio and keftedes, and bundled Mongo back into the truck.

As soon as Mongo entered the house again, he went straight for the water bowl.  It was then that Dad noticed the Sailor Boy Pilot Bread box was knocked over on the counter.  He bent down and peeked into the box.  Sure enough, it was empty.  Dad put two and two together and came out with thirty-six.  There had been thirty-six large dry crackers in the box when Dad had left that morning!  Based on that figure, Dad determined Mongo was still going to need a lot more water to re-hydrate that many crackers.   So Dad had replenished the water in the morning, but Mongo had drank it all.  Even Mongo’s giant-sized bowl had not been enough to compensate for thirty-six crackers.   Dad was amazed that after eating all of those crackers, Mongo hadn’t just shrivelled up like a raisin.