This last weekend was an exception.  A line of squalls had been forecast to roll through Seattle, and with them came the hope for some meteorological excitement.  And on Sunday, the promise was fulfilled.

Dad and Mongo, however, had left the house blissfully unaware of the weather forecast.  All Dad had noticed was that the sun was for a few minutes, and it seemed like to a good time to take Mongo out for a romp.  Mongo was up for anything.  Dad was happily clueless.

They loaded up in the truck and moved out.  Dad had spent several hours the night before at the local laundromat washing all of Mongo’s fleece throws, including the one in the back of the truck.  Mongo happily jumped up into the nice soft clean fleece.

At the park, Mongo bounded down the path to the open ball-throwng area.  He galloped through the pitch and introduced himself to all the dogs on the field.

Dad continued on down the path to make the loop around the perimeter of the park.  Mongo lingered behind to socialize.  Dad as Dad walked out of sight down the path, he whistled.  A moment later, Mongo came galloping down the path to find Dad.

As the path turned to head away from the field and into the forest, there was a large green puddle with signs posted around it, “Keep Dogs out of Water”.  Two weeks ago, Mongo found that puddle and rolled in it before Dad could corral him.  That resulted in bath for Mongo, and Dad spend hours in the laundromat washing throws.  This time he deftly maneuvered Mongo around that puddle.

Eminently pleased with himself, Dad continued around the corner.  Mongo was trailing a few steps behind.  Dad paused to comment on another Lab coming the other way up the path.  The woman walking next to the Lab said, “I see you have one too”, and nodded her head towards Mongo.  Dad turned to look behind him, and saw that Mongo had taken advantage of the momentary pause in their promenade to wallow in a different mud hole.  While Dad watched silently in shock,  Mongo decided that the puddle was clearly not muddy enough.  So he stood up  from his wallow and scratched at the bottom of the puddle to  mix up all the really good sludge.  Satisfied that the mud was really dirty,  he plopped back down, with his tongue hanging out of his big smiling face.  He looked immensely pleased with himself.

At least this one wasn’t florescent green like the last one, thought Dad.  Who knows what combination of chemicals had caused that color. Still, this was going to require another  bath for Mongo regardless.  Dad sighed.

Wallowing in the Mud

They continued on their way.  Lots of people smiled and laughed at the muddy Lab, until he bounded over to them, whereupon they typically shrieked, and screamed, “Don’t shake on me!”  Dad just shook his head and kept walking.  They were in a dog park, and it was a muddy day.  By this point, he wasn’t too worried about a little collateral damage.

Dad had been so preoccupied with his muddy buddy during the walk, that he completely failed to notice the change in the light around them.  While they had been out, the skies had grown ominously dark and foreboding.

They finished their circuit of the dog park, and were heading toward the parking lot when the skies suddenly opened up with a crack of thunder and deluge of rain.  Quickly Dad noticed something bouncing off the ground.

Pea sized hail was pelting them and bouncing off the ground like popcorn.  The wind threatened to rip Dad’s hiking hat from his head.  They could see walls of water coming toward them.  More thunder echoed off the hills of West Seattle.

Dad looked down to the one shelter in the park, and then over at the truck.  There were equally far apart.  He thought for a moment and then made his decision.

Dad  turned towards the truck. Dad figured they were going to be equally wet no matter which route they chose, and if they reached the truck, they could soon have heat.  If they ran to the pavilion, they would still be soaked but would be left standing out in the cold.   “C’mon Buddy.  Let’s pick it up”, barked Dad as he grabbed the front of his hat and broke into a run.  Mongo was only too happy to oblige.

The deluge continued while they trotted towards the truck.  The hail bounced off the path, and Dad could hear it bopping off his hat.  As they neared the truck, the leading edge of Dad was completely soaked.  Mongo trotted along, thoroughly nonplussed. Hail bounced off his big plushy head.   More thunder pealed through the hills.

As they reached the tailgate for the pickup, Dad’s first instinct was to bail into the truck in the classic Captain Kirk dive-and-roll maneuver.  But as he opened the tailgate for Mongo, one thought suddenly flashed over his mind. He turned to Mongo and said, “You just wait a minute Mr. Mud-ball.  I am not washing this blanket twice in the same weekend!  You can just ride home on the bed.”  He shook his head and scooped up the blanket and put it in the passenger seat.  The down pour continued.  Water was pouring from the brim of Dad’s hat.  The front of Dad’s jeans were now completely soaked through.  Regrettably, it did not seem to be washing any of the mud off of Mongo.  It looked like this would be a long scrub when they got home.

Dad continued to be drenched as he opened the tailgate and shepherded Mongo into the truck.  Then he raced around to the cab, and hopped into the drivers seat.  He paused for a moment to assess just how wet he was.  Soaked was the answer.  He put his hat down on the nice clean fleece. 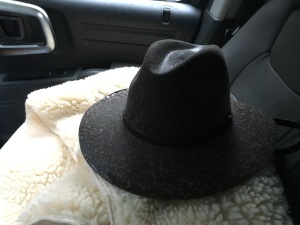 Then he pulled out of the lot, and began the drive home.  Hailstones were still pelting the windshield, as water streamed along the sides of the road towards the sewers

When they got home, Dad gathered up some towels, and herded Mongo into the tub.  It was a long hard scrub to bring him back to white again.  When they were finished Mongo was exhausted and collapsed downstairs next to Drewbie. 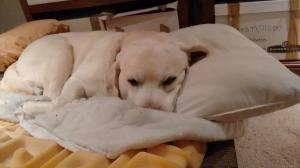