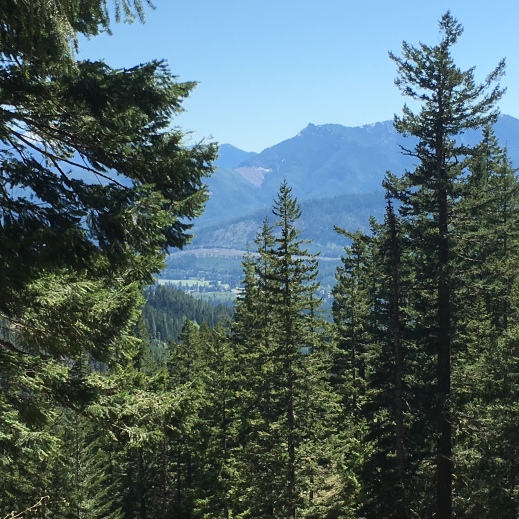 It was now noon.  Dad needed to figure out how to burn off some of the massive amounts of sugar Mongo had  recently consumed.  (Click HERE to read about Mongo and molasses.) Poor Dad had run errands for Mom-mom all morning as penance for leaving the molasses and corn syrup out where Mongo could find them.

Now he needed to get Mongo moving before all that sugar turned to pudge.  He studied his copy of “Best Hikes with Dogs”

“Kachess”, he said aloud to Mongo.  We’re going to hike the Kachess Ridge.  It was exceptionally warm for the first day of May, but that shouldn’t be problem thought Dad.  There was plenty of water along the route and he would carry some extra water and doggie nom-noms just in case.

“The trail to Kachess Beacon is steep much of the way, but it is easy to get to, well-shaded, and less than three miles long.”

It seemed like a good choice.  It was a bit closer than Dad’s favorite hike to Snoquera.  And since it was already noon, they did not have a lot of time to spend in transit.  It had a 1500 ft climb, so they would get a good workout, and it looked like a fun hike…

Dadb loaded up Mongo in the truck with some water and nom-noms, and headed out of town on I-90.  They exited at Lake Easton State Park and followed the directions to FR-4818 road.  Of course, none of the road signs said FR-4818 .  There were three roads to choose from.   Dad had to use the process of elimination to find the right one.  One road had a “DEAD END” sign.  Dad tooled down the next road, but it rounded a curve and  dead ended too.  Dad thought that road deserved a DEAD END sign also, but who was he to make such a weighty decision.  That left only one possible road. Dad and Mongo barreled down the last road.  He was looking for a turnoff to the right, but nothing looked promising, but when they ended up at the lake, Dad knew he had gone too far.  However, lakes are always a joyous part of Mongo’s day, so Dad pulled over to the let the little guy have a swim.  When Mongo had cooled off, Dad loaded his little wet buddy into the truck and headed back up the road again.

He drove a little more slowly this time.  A trail of road dust streamed from the back of the truck  Dad looked carefully for the forest road, and  eventually found the turn.  He moved slowly up the road, as it was a single lane, and a couple of times he came nose to nose with trucks headed the other way.

When they made it to the lot, it was full.  But there were two trails that diverged from this lot, and Dad figured that most of the hikers would stay on the flat lower trail.  He and Mongo would miss most of them, because they were going to take the high road.

Mongo was ready to go. Dad walked to the tailgate and looked over  the tailgate in the bright sun.  The reflection off the truck was so bright, he had to shield his eyes.  It was the super powerful Seattle summer sun.  The phenomena that made Seattle one of the highest per capita sunglass markets in the world, even though the city only gets five months of sunshine a year.  Fortunately, the trail looked like it was shaded by the forest canopy, because Dad had forgotten to pack sunscreen. He made a mental note to stash some emergency sunscreen in the truck when they got back to civilization  However, When he got back from the hike, he would find the emergency sunscreen he had already stashed in the truck, but for the time being, he had forgotten about that too.

So without further ado, Dad gathered his backpack and the two of them took off for the mountains.

The guide book said the first part of the hike on the high road was steep.  Dad noted that they were not kidding.  He estimated that they climbed 1500 feet in the first mile.

Shaded beneath the green forest canopy, they climbed, from a wildflower zone with mallow plants, and Indian paint brush in bloom, to an alpine forest zone.

In the alpine zone there were trillium plants in bloom along the trail.  Mongo loped right past them.

And finally, as they continued upward, they reached the snow zone.  Now Mongo was ecstatic.  Trillium and Indian Paint Brush don’t capture his interest, but snow always does,

In fact, Mongo loves snow.  He rolled in the snow.  He ate snow, he surfed on his ears in the snow.  At one point Dad had to pull him from his reverie because Mongo was about to joyously ear-surf right off a cliff!

When Mongo had finished his frenetic frolicking, they hopped back to the trail.  Dad could hear the sound of crashing water, and was interesting in exploring further.

Sure enough, as they climbed a little higher through the snow, Dad could see a waterfall ahead.  They journeyed up as far as the falls and then detoured down to the stream  There was a nice little bank along this part of the energetic creek, and it made a perfect place for Mongo to get a nice drink of water. 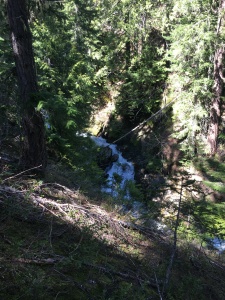 When Mongo was finished drinking, Dad paused and surveyed their surroundings.  There was a lot more snow ahead, and he had not brought gaiters.  That meant if they continued much further up the trail, he would be walking all the way back to the truck with wet feet.  Also, he had gotten all the climbing out of the way already, and that was the main thing he was after.  And Mongo had ear-surfed to his heart’s content, so there wasn’t much else to accomplish on this hike. 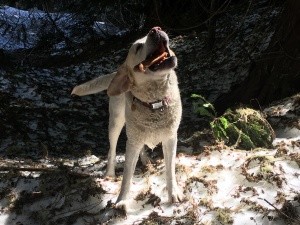 At this point, Dad decided not to go any Hilfiger, which was OK with Mongo because he had found a stick in the forest.  And Mongo really liked his stick.  He brought it over for Dad to toss.  So Dad tossed it in the water, and it sank.  Poor Mongo was befuddled.  He could see the stick, but it would not float in the water.  (Click HERE to see a video of Mongo & Stick)  Eventually Mongo just looked at Dad.  Dad was powerless to save stick too.

So they made their way back down the path to their truck. There upon they headed back down the forest road towards Seattle, leaving a trail of dust in their wake.