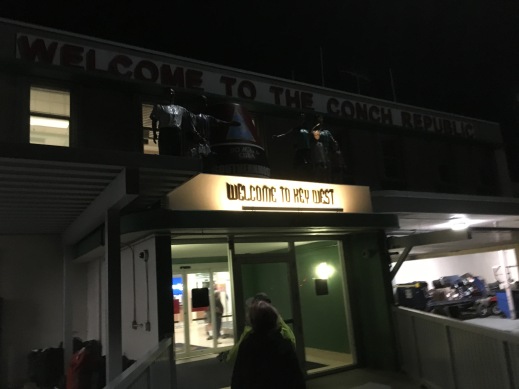 Dad spent most of February in Atlanta this year.  Mongo does not get to go to places like Atlanta with Dad.  In fact fewer and fewer airlines are even accepting big dogs for carriage.   So Dad goes on these trips solo.

At the beginning of the month, a snow storm was forecast for the weekend.  Dad saw no good reason to stay in Atlanta if it was going to snow, especially, since he could get to the Florida Keys very easily.  So he made the easy decision to take a quick hop to Key West.

On Friday, Dad jumped a flight heading south.  The flight into Key West was almost empty.  The lack of passengers on a Friday evening struck him as odd.  He know there had to be a reason.

The plane arrived in Key West just after sun down.  The few  passengers walked out in the open towards the terminal.

Once inside, Dad declined to rent a car and just took a van to the hotel.  After checking in, Dad decided to take a walk down to Duvall St. 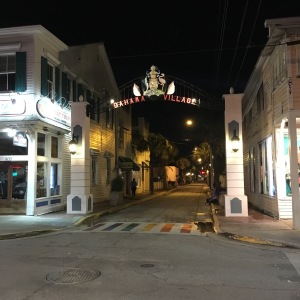 He started off from the hotel walking toward the southernmost point in the continental United States.  He navigated under the illumination of the street lamps.  There was a stiff breeze that stirred the palm leaves above him.  The churning leaves cast dancing shadows on the sidewalk.  He stopped at the marker, looked around for a moment, and noted the sea was a bit rough.  He turned and headed up the street 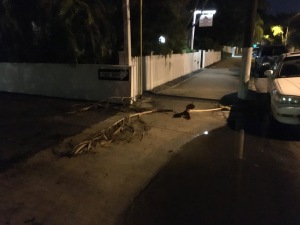 After a short walk, he came to the Abbondanza Restaurant.  He peeked inside to get a feel for how busy the place was; it was empty.  Dad was not sure how to interpret the lack of diners.  Was this a soon-to-be failed restaurant?  Perhaps it was new and had yet to be discovered.   Location didn’t seem to be the problem, as it was on what appeared to be prime real estate.  He decided to give them the benefit of the doubt and at least read the posted menu.  It was fairly comprehensive, so he headed in.

He was seated immediately.  Empty tables were everywhere.  One of the few occupied tables was a couple sitting across from him.  They seemed to be enjoying their meal.

Dad ordered, and began to enjoy his salad, when the sound system began to play “Volare”.  Without thinking, Dad started to sing along quietly.  Then he noticed a disturbance at the table across from him.  The young man at the table was looking at Dad with a smile, “Come on” he said, while gesturing to his dinner partner.  “She says I can’t sing alone.”  Dad laughed and joined him in a Duet of the Dean Martin tune. After some more laughter and a toast, everyone went back to their meals.

After dinner, Dad decided to head to Duvall St. proper.  When he arrived at Duvall St., he pretty much had the sidewalk to himself.  The neon lights from the businesses poured directly onto the sidewalk practically uninterrupted except by Dad’s passage.  The chill breeze continued to blow from the ocean. 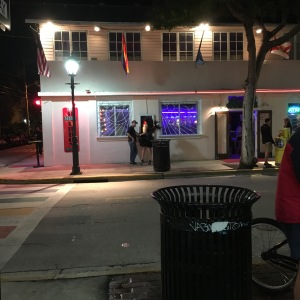 “Ladies” of the night

He wandered all the way down to the museum district looking at all the storefronts, and then made his way back to the center of the entertainment district.  All the souvenir shops had already closed, but the bars were still open, so he stopped in one that caught his fancy.

Jimmy Buffett’s Margaritaville felt as abandoned as the restaurant.  There were less than ten customers in the entire bar.  Dad ordered a signature cocktail, and put in a request with the duo playing guitars on the stage.  Dad settled back into his seat, and enjoyed his margarita to fine rendition of “It’s Five O’clock Somewhere”. 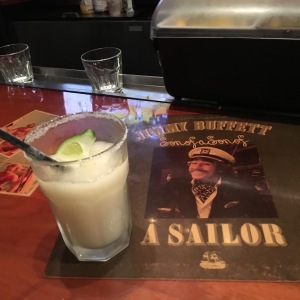 Dad felt so bad that the place was empty, he went out of his way to tip the bartender and the musicians.  As he sauntered back to his hotel in the damp night air, Dad started to wonder where everyone was.  The plane had been almost empty.  Perhaps it was off-season, but then again, everything was open.  The streets were almost deserted, but the hotels and bed and breakfasts were all open.  It was not making much sense.  The restaurants and bars were practically empty, but they were all fully staffed.

Before, heading to his room, visited the hotel’s beach.  In the dark, he could hear the waves crashing on the shore, and he could see off the foam from the churning surf reflected in the overhead electric lights.  He stood transfixed for a moment, and then walked quickly back to his hotel room.

He did not have any more time to ponder the mystery of the empty streets.  As soon as he got back to the hotel, he laid out his clothes for the next day.  Then he consulted the internet to plan his itinerary for the next day.  He had an extremely important mission to complete during the day, and it would require split second timing.  For it to succeed, and it had to succeed, every part of the plan would have to fall into place perfectly.